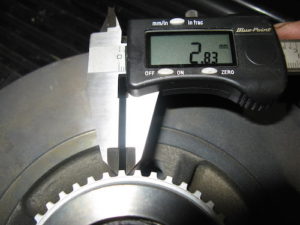 Braking news !!!!! You get what you pay for !! This Renault Clio Sport 182 was presented into our workshop having just had the front and rear brake discs and pads replaced at by a different Garage. The customer quickly represented the car to the garage with a complaint that since the work was carried out the ABS light had come on. The garage quickly dismissed the claim and said it must have been a complete coincidence and they were just the last ones to touch it. Having run a vehicle repair workshop for numerous years I can actually sympathise with what they have said although on this occasion I decided to inspect what they had done more carefully. This particular brake application utilises the rear brake disc as a complete wheel bearing and ABS phonic wheel assembly. I initially carried out a serial diagnostic analysis to verify the dtc’s present in the ABS| control module. It presented me with a DTC for wheel speed coherence fault. A short test drive and data log confirmed the two rear wheel speed outputs were indeed an average 5 kph faster than the front causing the light to come on. I quickly raised the vehicle on the inspection ramp and removed the wheels and noticed although what looked good quality brake discs were none genuine. It didn’t take me long to call Renault and place an order for genuine Discs and pads with a full fitting kit. In the mean time I removed the calliper, carrier to remove the brake disc and measured the distance between the teeth on the phonic wheel used for ABS wheel speed input using a set of digital Vernier callipers. They say a picture paints a thousand words. I did question the customer about the initial cost of having the discs replaced to which he replied ‘it was cheap’. there’s another saying which I agree with and in this case it’s spot on. “buy cheap, buy twice”