The badge on the boot displays the magic letters RS6.  Then you look to the other side and it’s the big one, V10!  This one is bigger than most due to the previous tuning work by us – Revo software and Milltek exhaust delivering 700 bhp.

The problem is simple enough; a battery that is losing charge.  I have always taught the principle that successful diagnostics rests on a proven process of measurement and the discipline to stick to it. However the challenge today has nothing to do with an out of date method, but has a great deal to do with how the car is built and this one is the extreme.

The first series of tests is simple enough; the battery located in the boot provides easy access for voltage and current tests.  The series of tests provide knowledge of voltage drop and current consumption cross reference against engine rotation speed.

The first check should focus on the battery specification and health status.  This can be done either using Pico diagnostics or a smart battery test, such as Midtronics 600 series.

In a perfect circuit, all the current should be consumed by the starter motor (consumer) and only a minimal loss experienced through the wiring.  Setting the Pico up:

The initial voltage drop may appear excessive, however focus on the recovery rate or rise time.  One to two compression events is normal.  Expect around 7V in a good environment rising to 10.5V over sustained cranking.

In our case, voltage drop was excessive, resulting in low current consumption and a slow rotation speed.  Our problem was establishing where the voltage drop was.  We also noted that with the engine running, we only had 10.5V at the battery.

With the RS on the ramp it became obvious how physically challenging this repair would turn out. The ideal tool for simple voltage drop test is the DMM.  The alternator was producing 14.7V! However at the starter motor, it had dropped to 10.5V?  The cable run between starter and alternator was quite short and hidden behind the sub frame and various engine parts.

That turned out to be the biggest understatement I have heard.  Let’s understand briefly how this repair went: 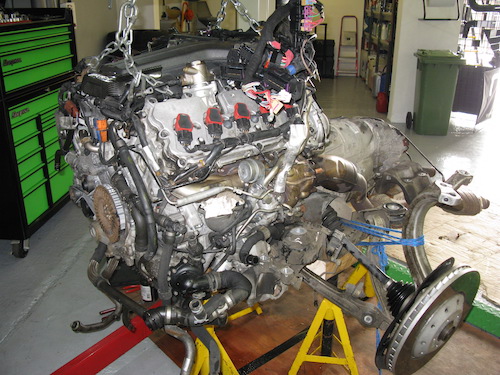 Remove transmission, manifolds turbo.  Now we can see and replace the cable.

It has corroded due to heat erosion and excessive current drop during cranking.  Several strands of cable have parted company.

The next step is straight forward – put it back together!