HAVING A GOOD PROCESS- POLO GTI

This month I would like to pick up on several issues which I’m sure affect usall.

It’s not often to feel satisfaction over a technical challenge, a vw polo TSI was dropped off suffering a problem with delayed crank starting. A local independent car dealer had presented the car to a friend working in the local dealership, following which a report of no fault found.

I can only assume this deliberation came from the absence of any DTCs, are there technicians simply not trained to examine actual data, or simply not trusted or worst allowed to think outside the box.

Perhapsit’s just me? But I couldn’t exist in an environment where technical pride, respect and ambition are suppressed. The dealerships offer some excellent training programmes, not withstanding their access to the relevant technical repair information. So where and why does it so often go wrong?

I promised the guys on a weekend training course last week to conclude the tests we carried out with a repair solution. For the benefit of everyone else let’s start at the beginning.

Initial first look confirms no DTCs,however the vehicle did suffer extended cranking prior to starting. Once started it ran smoothly. Some 10 years ago I developed a process of testing hydraulic high pressure pumps using analysis from the pressure sensor profile. Initially for common rail, and later adapted to petrol high pressure systems. Having no test data on this system variant it presented a perfect challenge to the diagnostic process.

The result of this composite observation, and we can now reveal our involvement in developing the new rainbow pico scope, confirmed an unusually slow pressure build up. 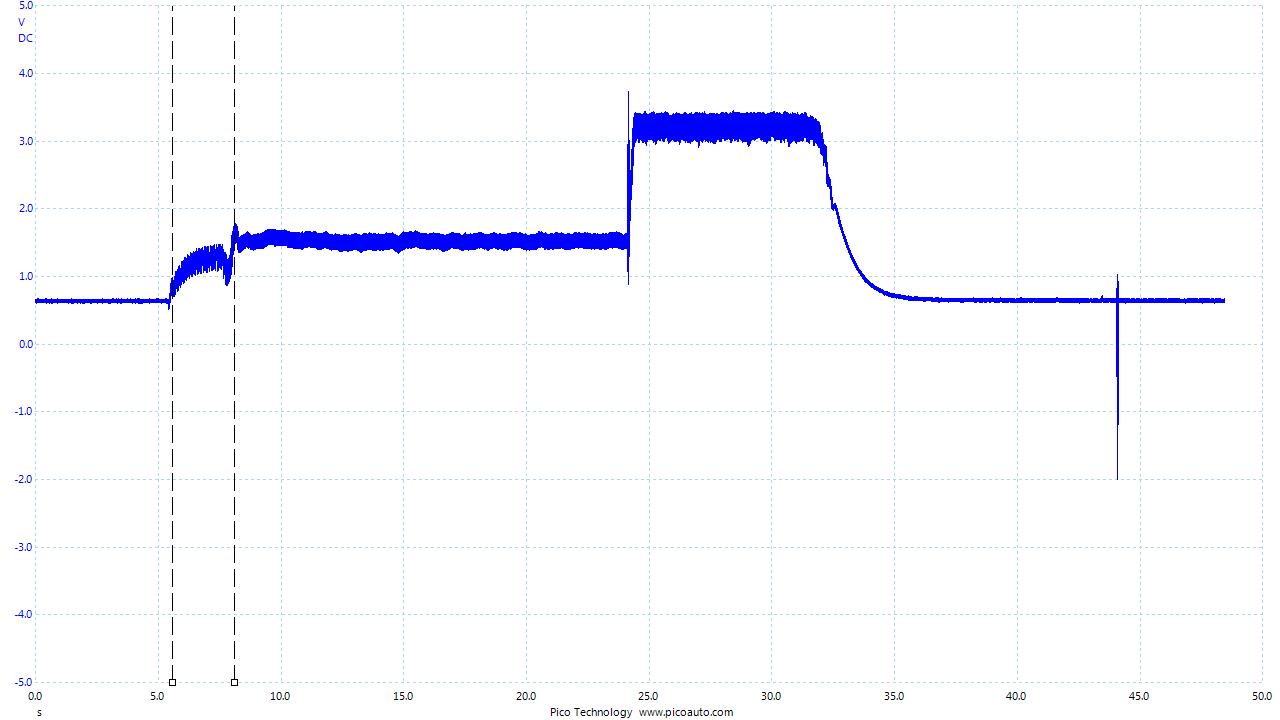 The next stage in the process involves intrusive tests . This  Part of our past development programme was designing a low pressure test gauge , the requirement was to monitor suction or positive pressure priming systems , together with flow and  the ability to conduct pump proof testing under real load conditions . Applying this test confirmed excellent low pressure priming with 6 bar available to maintain high pressure pump pressure.

The most interesting aspect of our initial observations, and unique so far for petrol systems! Was that until a certain pressure was reached no triggering of fuel or spark took place.

We also noted that no driver outputs were present at the high pressure control valve, therefor no current was present either. This further confirmed our training group’s findings that the valve is actually a volume control device.

The other intriguing part of the waveform profile was the accelerated decay time, not normal for this pump type.

So the decision! You need a new pump mate, with just one cravat check the camshaft drive lobes and follower. Othernon-relevant issues found included a reduced burn time on coil 3, and no current transition across the wideband sensor.

Replacing the pump reduced the rise time to 630 milli seconds. It was also noted via TPS that the pump had undergone several part no updates.

This brings me to our involvement in the OESSA initiative and the hands on technical conference this November. My workshop is seeing an increase in repair reworks. Each case without exception has been due to the owner opting for price not cost! Reducing the cost of a repair is easy, you cut corners in the process and use substandard parts. As a footnote to parts supply and the independent trade, we recently received a luk oe dual mass flywheel, nothing wrong in that, except it had been pre fitted. Thewell-known supplier wanted to return it as a warranty claim!

I’m not surprised our trade is in chaos when companies supplying our parts have so little commercial respect,perhaps I should name them on our web site?