This repair fell right in the middle of the Scottish vote for independence, considering the possibility for an export licence and the distance between the owner’s home near Biggar and Preston, a Citroen relay presented some interesting problems.

A second-handengine, a replacement gear box, and a new egr valve,I’m sure there was more to consider.

The owner specialised in transporting vehicles across the country, and offeredto drive the vehicle to Preston.

The vehicle didn’t quite make the journey, bit like the vote for independence I guess. Upon arrival a quick serial scan reported faults with no 1 injector and turbo boost negative boost deviation.

A quick test drive revealed a badly misfiring engine and no turbo boost. The next process was to subject the charge pressure circuit to a smoke test. We modified our red line tester some time ago in order to fully pressurise intercooler systems, most diesels operate with 1.4 bar of boost. However in this case there was no need for such pressure,the leak was very evident. A steel hose from the egr valve to the inlet manifold was leaking badly.

The evidence so far suggested a loss of boost to be a simple system leak, and until repaired no further tests are possible. The badly missing engine could however be due to several causes, a fuelling error, a mechanical error, either internal or an ancillary component such as the EGR valve.  Thesymptoms, a hard dtc error relating to no 1 injector was a sensible place to start.

The customer expressed some doubt over a genuine egr having been fitted. The next task involved removing the whole EGR assembly. It was clear from the poor assembly that many of the problems could be man-made when the engine and gear box were fitted. Coolant hoses, wiring loom and intercooler hoses were not run or clipped correctly.

The egr transfer hose to the inlet manifold was loose and no seal had been fitted. Confident with the findings so far, the reassembly went smoothly. The engine started promptly on 4 cylinders with no smoke or excessive diesel knock, as is common with combustion related problems.

Having cleared the dtc s our next task was to data log key data relating to turbo boost, egr feedback, and injector smooth running balance. All of which proved normal. Infarct the vehicle performance was remarkable.

A week after returning the vehicle and following several hundred miles of use the customer complained of diesel knock and a flat spot only when cold. We discussed the options and symptoms, agreeing to replace the two remaining injectors. I carried this work out at his home, and must agree that the diesel combustion noise from cold was reduced, a test drive also confirmed no flat spot.

Some 3 weeks later yet another call from the owner, describing what sounded like serious problems, lumpy engine, smoking and lack of power. Confident of my work so far, I suggested the sensible option of transporting it back to our workshop. Upon receipt the only problem we discovered was a slight air leak from the plastic filter housing. As this was a suction system a lack of fuel and cavitation would cause severe running problems. A complete new housing was fitted and fully tested with our ads low pressure gauge , this confirmed a perfect seal and the status of the high pressure pumps ability to create a pressure differential across the filter housing.

With wisdom in mind we decided to keep the vehicle over an extended test drive. After several days and some 150 miles of faultless performance the exact symptoms described by the owner occurred.

The only clue was excessive diesel knock and smoking. With no additional dtc s this has to be a fuelling combustion problem. Consulting autodata wiring schematics my next suspicion was a faulty rail pressure signal or intermittent hp pump internal error. Reflecting on exactly how and when the problem occurred it transpired following the passing of a speed bump. Examining the wiring to the rail pressure sensor and pump volume valve exposed a wiring conflict with a metal support bracket. 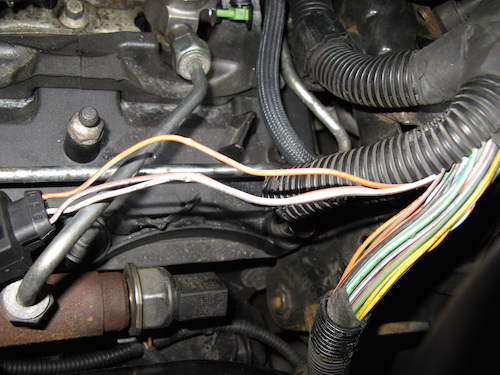 So a lengthy series of problems with remarkably similar symptoms, a grateful and understanding owner resulting in a satisfying end.