Quality Costs less then you think!

This article was kindly written by my good friend and colleague Sean Lynch of D&S services based in London. www.facebook.com/Dsservs

Quality Costs less then you think!

I was recently asked by a local engineering shop to look at an 07 Mercedes Sprinter that had drivability issues with a noise on the turbo but with limited boost.
On the initial diagnostic scan it pointed towards a turbo boost problem. Before I condemned the turbo I performed a few procedures to test the related systems .(inter cooler and boost system,exhaust ,egr and turbo control)
After these tests proved ok I was happy to conclude my diagnostics with a failed turbo.Job done,findings explained ,customer happy & invoice paid.
End of story? No!
A few days later came a phone call explaining that after the turbo was repaired, if was refitted and there was no change in performance in fact it was slightly worse. The original turbo had signs of oil starvation which tallies up with the lack of performance & noise, so what was done by this so called “turbo specialist”? It all seemed ok on the visual side, a nice new turbo core, shiny new electric actuator . Rod moving when ignition was switched on. I repeated my tests and was suprised to notice the boost was actually decreasing when the turbo was actuated within the diagnostic software! The Dpf was unbolted to release any possible restriction.the egr which was slightly sticky was replaced with a known good unit.still no boost!
It seemed the Turbo was working the wrong way when I was driving it. Boost was higher then expected when no boost was demanded and then no boost was present when boost was demanded. Software issue? Surely not!
I called the turbo repair shop to ask if there was any way it could have been installed incorrectly or the wrong actuator fitted,the reply was what I expected, “all our turbos are vigorously tested before they leave, you have another issue!!”
Back to the van. Time for another approach as this was now taking some time , I decided to stop and logically approach this issue…
If the turbo is working the wrong way , what would happen if it was forced into limp mode? Usually the first thing that happens in limp mode is the turbo is restricted or fully turned off. So if was working the wrong way around , wouldn’t it create boost? Worth a try!
I unplugged the exhaust back pressure sensor, the turbo control moved the opposite way and Bingo!! Boost .
This really did look like they had built it wrong but how to prove it?
I needed to get another van with the identical engine and turbo and watch the rod moving.
The first two photos show Another van with an old turbo with no faults, making full boost .The white mark I made is straight across showing the resting position
Picture 1. Ignition off, turbo in failed or low boost position
Picture 2. Engine running at idle , turbo in max boost position. The white mark has moved down .
Picture 3 . Repaired turbo . Ignition off
Picture 4 . Repaired turbo engine at idle.
The customer now has an additional diagnostic fee to pay which I hope they can reclaim from the turbo company .
As I said in the beginning
“Quality costs less then you think !
Thanks for reading. 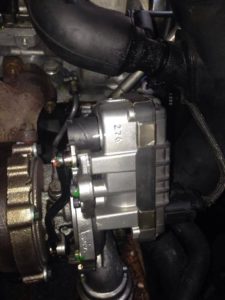