The next technical Era

I was tempted to call this feature new technology, it is however not all that new. What’s remarkable is the way in which the chosen technologies are fully integrated, even in vehicles of a more modest price range. The systems I have chosen are from the Audi range. In writing this feature the real challenge was what to exclude, as the chosen subjects represent just a small part of a fully integrated vehicle chassis and power train network.

In qualifying the above list I have just placed an order for the new seat Cupra 280 DSG, which embodies many of the technologies discussed.

Variable valve lift and cylinder on demand employs the same technology. The camshaft core is splined, over which the camshaft lobes are carried on a sleeve. The sleeve has a helical groove at each end. The grooves control the lateral movement. At each end of the sleeve is a solenoid, which engages a pin into the helical groove, thus causing it to move sideways when demanded by the PCM? The performance variant moves a high lift lobe into engagement within a single cycle. The cylinder on demand variant engages a zero lift base CAM, thus disengaging the cylinder, fuelling and ignition is also disrupted. This later system enables the v8 engine to smoothly convert into a 4 cly. 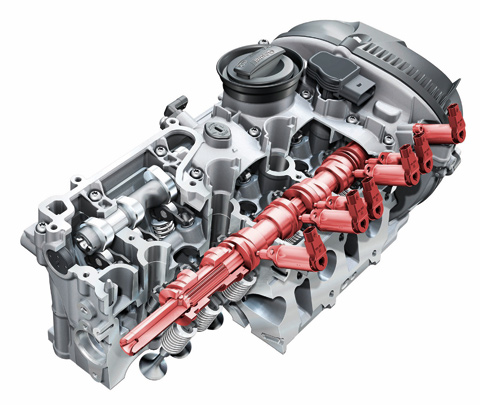 First the active damping system, oscillations are measured by sub frame sensors G748\749, these transmit an analogue signal between 0.2, 0.8 volts. The output is evaluated by the sub frame control module J931. It then sends out counter oscillation control to the sub frame actuators N513\514.

Active noise cancellation is an extension to the vehicle sound system. The sound control module J525 relies on noise input from 4 microphones, the subwoofers are employed as actuators. The noise input frequency and amplitude is processed then matched with a noise cancelling output. And calculates phase, frequency and amplitude. It becomes active when the ignition is switched on regardless of the infotainment status. It activates both noise cancelling and active damping control upon cylinder on demand activation. On some models the actual engine noise is a product of the sound system, it’s artificial and can be selected!

Combined with magnetic suspension damping yaw and pitch inputs, the latest Audi intuitive steering control actually imparts a suggestive torque input to the steering wheel. Thus assisting in vehicle stability control. A sensitive torsion bar in the steering column detects driver input via an optical movement sensor. The system is both active and reactive in assisting vehicle safety. The amount of assistance and the feedback ratio is electronically controlled  via a brushless motor.

For any non-believers in the need for investment and training I hope this topic convinces otherwise, additional to the technology mountain, manufacturers,  working with internet and software companies are planning to introduce real time telemetry. Directly informing drivers of fault and servicing status. Control of chassis coding components through VM regulated pathways is a direct threat to customer choice and your independence.